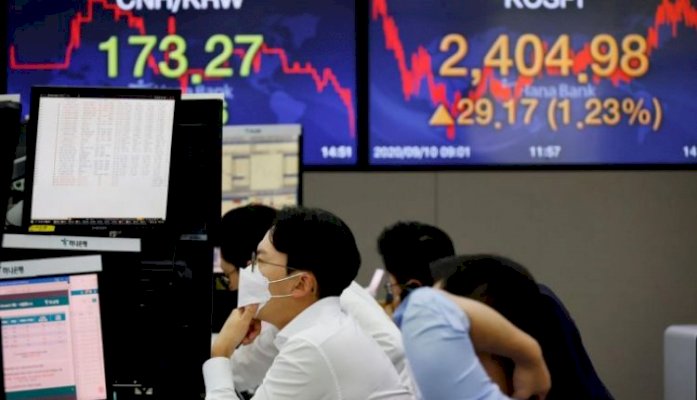 SINGAPORE – Asian equities extended gains on Tuesday (Sept 15) and the US dollar slipped, with investor sentiment supported by Chinese data and optimism about Covid-19 vaccines.

Chinese blue chips added 0.4 per cent, buoyed by data showing China’s industrial output rose 5.6 per cent in August from a year ago, expanding for a fifth straight month.

MSCI’s broadest index of Asia-Pacific shares outside Japan advanced 0.3 per cent, for a fourth straight day of gains.

Singapore’s Straits Times Index was up 0.6 per cent at 11:44am local time.

“He’s seen as someone who’s particularly stock market friendly. The fact that we’ve got political certainty for the next two years from someone who’s connected to the free market is going to be good news for Japan,” said Jim McCafferty, joint head of Asia Pacific equity research at Nomura.

So far this year, gains in Asia have been led by technology stocks.

“From an asset class point of view, if you require to generate any income from your investment portfolio, then equities is one of the few places you can do that because bond yields are so low,” said McCafferty, who prefers North Asian companies due to their stronger balance sheets.

US retail sales figures from August are due Wednesday.

Investors will also look to central banks for direction, with the US Federal Reserve starting a two-day policy meeting on Tuesday, the first since unveiling a landmark shift to a more tolerant stance on inflation in August.

The Bank of Japan and the Bank of England announce their respective policy decisions on Thursday.

Markets will be focused on projections from Fed policymakers on the US growth outlook and on any details about what the bank intends to do to encourage inflation.

The Dow Jones Industrial Average closed up 1.2 per cent and the S&P 500 rose 1.3 per cent while the tech-heavy Nasdaq Composite added 1.9 per cent.

US stocks gained after drugmaker AstraZeneca said it resumed its British clinical trials of its COVID-19 vaccine, one of the most advanced in development.

The euro ticked up to US$1.1867, having gained for four straight sessions until Monday.

Gold prices put on 0.3 per cent, extending a sharp rise in the previous session.

US stocks rise with S&P 500 ending at another record

Singapore shares buck regional trend, with STI down 0.37 per cent

US stocks pull back from records to end lower