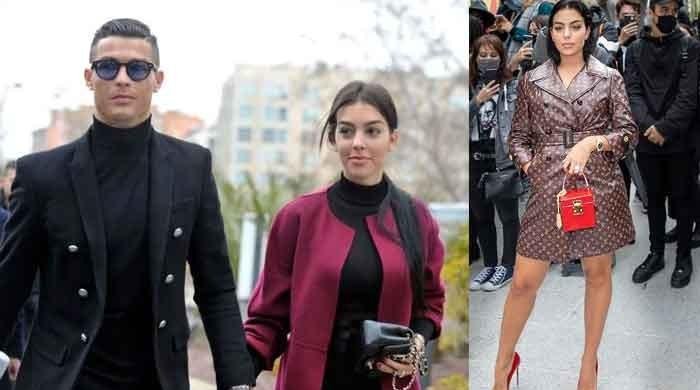 Cristiano Ronaldo’s girlfriend Georgina Rodriguez stunned the onlookers with her grace as she appeared in a trench coat at a fashion show  in Paris.

The 26-year model  sported a gorgeous trench coat  and red heels  to show off her stunning model figure, she also carried a matching hand bag to give a perfect look to her personality.

The people could not turn their eyes from her  as she arrived the Louis Vuitton fashion show in Paris on Tuesday. She  made a very elegant exit from her luxury vehicle and headed inside the newly restored La Samaritaine department store.

The model was also seen wearing  a diamond ring on her wedding finger after amid the speculations that she is  engaged to the renowned football player.

She’s reportedly spending quality time with her boyfriend,  whose signed Juventus shirt was stolen by a thieve on Wednesday. Police were investigating a reported burglary at the football star’s Madeira home.

Taapsee Pannu’s Maldivian vacation gives us a glimpse of serenity

Heathrow optimistic for year ahead despite huge losses

News-tip Feb 24, 2021
Heathrow Airport has reported a loss of £2 billion for financial 2020 as Covid-19 restrictions saw travel come to…

Venezuela kicks out head of EU delegation after new sanctions

Officials at hearing point to security, intel failures in US Capitol riot

Djokovic praises Williams as ‘one of greatest athletes’