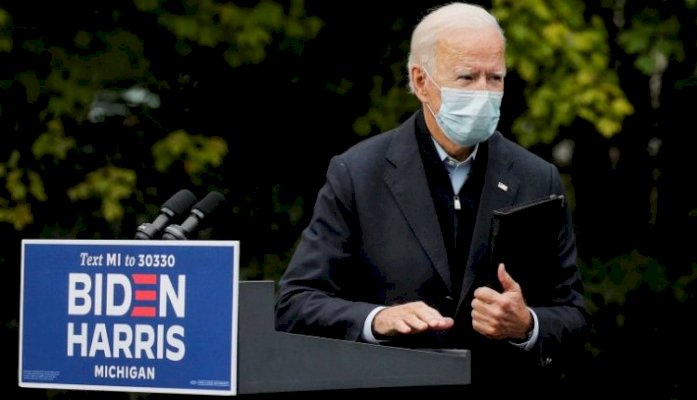 The campaign gave no other details when asked about the frequency of Mr Biden’s recent testing, according to the pool report.

Mr Biden’s campaign is looking to keep its focus on the nation’s response to the pandemic in the final month before the Nov 3 election.

Mr Biden has repeatedly wished Mr Trump a speedy recovery. But Mr Biden and his aides have used his Republican rival’s positive test to underline a consistent campaign message: Mr Biden would handle the pandemic better than Mr Trump.

Deputy campaign manager Kate Bedingfield said on Sunday that Mr Biden would keep making that case for the remaining 30 days of the campaign.

“It’s a choice between two different styles of leadership and since the virus came to our shores back in the spring, Joe Biden has led by example,” she told ABC’s “This Week,” citing the campaign’s use of masks, social distancing and limits on the number of people at campaign events.

On Monday, Mr Biden and his wife, Jill, are scheduled to resume in-person campaigning in Florida, where opinion polls show a tight race for the state’s crucial 29 electoral college votes.

Mr Biden will talk to Hispanic voters about his plan to rebuild the US economy after the coronavirus, his campaign said.

More than 3.3 million ballots had already been cast nationwide by Sunday, according to the Elections Project at the University of Florida – as more Americans vote early or by mail to avoid being exposed to the virus at crowded polling places on Election Day.

The United States has recorded 7.4 million coronavirus infections and more than 209,000 deaths in the pandemic, more than any other country.

Mr Biden opened his widest lead in a month in the US presidential race after Mr Trump tested positive for the coronavirus, and a majority of Americans think Mr Trump could have avoided infection if he had taken the virus more seriously, according to a Reuters/Ipsos poll released on Sunday.

The Oct 2-3 national opinion poll gave little indication of an outpouring of support for the president beyond Mr Trump’s core group of followers, some of whom have gathered outside Walter Reed National Military Medical Center, where the president has been hospitalised.

Mr Trump has repeatedly dismissed the severity of the pandemic as something that would disappear on its own, chiding Mr Biden as recently as last week for wearing a protective mask, even as the coronavirus infected millions of people and forced businesses and schools to close.

Among those adults who are expected to cast ballots in the Nov 3 election, the poll found that 51 per cent were backing Mr Biden, while 41 per cent said they were voting for Mr Trump.

Mr Biden’s 10-point edge over Mr Trump is 1 to 2 points higher than leads Mr Biden posted over the past several weeks, though the increase is still within the poll’s precision limits of plus or minus 5 percentage points.

Biden Facing Pushback From His Own Base On Judicial Nominees

The Lawsuits Against Donald Trump Are Stacking Up

Biden calls on Congress to reform US gun laws