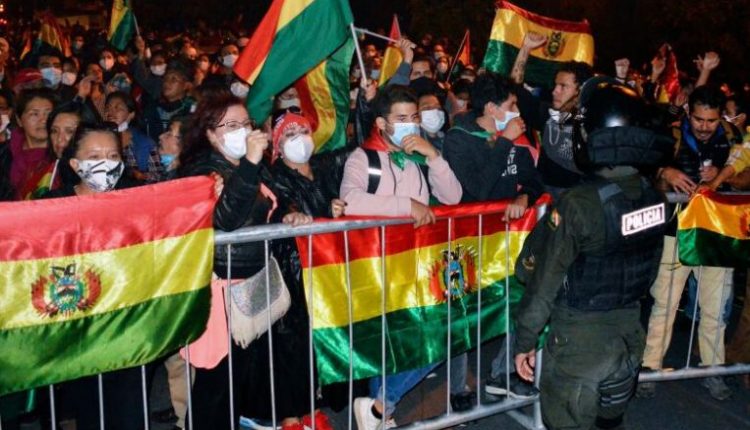 LA PAZ – Hundreds of Bolivians protested on Tuesday (Oct 20) against the impending election win of Mr Luis Arce, as the slow official count appeared set to confirm the leftist as their next president.

And at about 3am local time on Wednesday, with 86 per cent of ballots scrutinised, the official count showed Mr Arce had 54 per cent, followed by Mr Carlos Mesa on 29.5 per cent.

Conservative Luis Fernando Camacho was in third place with 14.4 per cent.

The usual rapid count had been abandoned after allegations of irregularities last year that led to Mr Morales’ November resignation after 14 years in power.

“It’s a fraud, as Evo Morales has always done,” Yeni, a participant in the protest held in Santa Cruz, Bolivia’s richest city and a Camacho stronghold, told AFP.

Mr Arce’s victory “is like a slap in the face”, said another protester, Ms Yasmani Acosta.

Dozens also protested at the headquarters of the Electoral Tribunal in the central city of Cochabamba, where votes were being counted.

Demonstrators there denounced a “fraud”.

Mr Camacho, for his part, expressed doubts about the outcome.

“We are living in moments of uncertainty created by a very poor administration of the electoral process,” he said on social media.

Mr Arce’s triumph surprised many because polls had predicted a runoff between him and Mr Mesa.

By Wednesday’s early hours, he was winning in six of the nine departments of the country, in three of them by more than 60 per cent: Cochabamba, a MAS stronghold; Oruro, where Mr Morales was born; and La Paz, the administrative capital.

The Bolivian Constitution declares the candidate who obtains an absolute majority or 40 per cent of the vote with a 10-point advantage over their nearest challenger as the winner in the first round. Otherwise, there must be a second round.

The election, twice postponed due to the coronavirus pandemic, was the first in 20 years not to feature Mr Morales, the country’s first-ever indigenous leader.

It came a year after he won an unconstitutional fourth term in an election that sparked weeks of protests, leaving 36 dead and 800 injured.

The rapid count in 2019 suggested there would be no outright winner, but after it was inexplicably frozen for 24 hours, Mr Morales had jumped into a winning lead over Mr Mesa once the live count resumed.

A later audit by the Organisation of American States found clear evidence of fraud.

An interim administration was set up, led by a right-wing senator, Ms Jeanine Anez.

She withdrew her candidacy for the presidential election shortly before the election.

Trial to begin for US policeman charged with George Floyd death

News-tip Mar 7, 2021
Action hero Liam Neeson seemed charged up with excitement as his movie Marksman started screening in theatres of…

Barcelona raise the stakes for Madrid derby with Osasuna win

China to carry out ‘prudent regulation’ of booming fintech sector

US labour market added more jobs than forecast in February

It’s a ‘big mistake’ for US to lift Covid-19 mask mandates,…