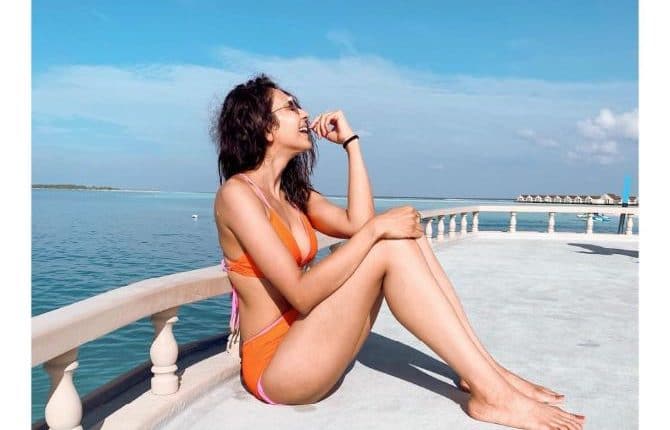 Actress Rakul Preet Singh is enjoying her timeout in Maldives, and scorching the beaches of the scenic holiday nation. On Saturday, Rakul shared a postcard-worthy moment for fans on Instagram. In her new photo, Rakul is seen soaking up the sun in a bikini.

“Smiles are contagious, be a carrier. Moments captured by daddy the great,” she captioned the image that has her soaking in the sun and breeze in an orange bikini. She completes her beach look with designer sunglasses and a dazzling smile.

Rakul is all set to star alongside Amitabh Bachchan and Ajay Devgn in the thriller drama, Mayday. The film is directed and produced by Ajay Devgn. The actress will be seen in the role of a pilot. This is her second film with Ajay after “De De Pyaar De”.

“I have worked with Ajay sir in the past and (I am) extremely thrilled to be working with him yet again as his co-pilot in a film where he is not just my co-star but director too,” Rakul earlier said.

Rakul will begin the shoot of “Mayday” mid-December in Hyderabad.

Tara Sutaria stuns in stunning monokini from holiday in…